My first Blog Azeroth Shared Topic comes from Mataoka of Sugar and Blood;

...with the new patch, and all the new things coming, what are three things that you will absolutely not leave behind? Consider these three objects your virtual backpack- the twist is, a tiny story to go along with each item.

My priest, has many sentimental memories associated with her, but not really a big amount of items I would save. I rifled through her bags to see which items I would never be able to delete, and came up with three things - though one is a "set".

I remember picking this up and thinking I would farm Argent Dawn rep at the time. I was hooked on this trinket because it used to make your character salute and a light effect would surround you (kind of what the leveling "ding" animation is).

There's no way I'm getting rid of this now, as the trinket is no longer available in game. I like to have things that no one else does! 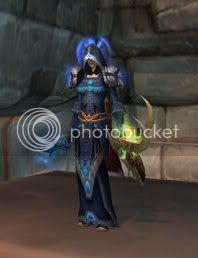 My first full tier set on my priest was T6. I raided in T4 and T5 but the Frozen Shadowweave Set was far too good to replace until T6 (and even then, the Shadowweave chest was still better than the T6 chest).

My dagger is still enchanted with Frost and Shadow Damage, my cloak still has 2% Reduced Threat and all the gear has the original gems and enchants.

I have great memories about T6 and the Burning Crusade, so my T6 will always have a place in my bank - no matter how many spaces I seem to keep filling!

I love this pink shirt, and I love that it gives your character a "Best in Show" buff! I remember looking at Precious when we were in ICC and thinking that it was adorable that she had a ribbon on her neck! Obviously someone really cared about that pooch.

When I won that shirt I wore it around everywhere and it's my default shirt when it doesn't clash too horribly with my outfit.

Since I've had my druid as long as my priest, I decided to check what items she had that I placed value on.

Ah, yes. I love this trinket, and I really thought the questline was neat up until it just kind of... stopped. I did this quest on my priest first and lost her trinket but decided to keep it on my druid.

Everytime you use this trinket, Eranikus speaks to you;
I remember when I first used the trinket and Eranikus was quite angry. I'd never seen anything like this before, and I still feel sad for Eranikus being trapped wherever he is.

This particular version of the Essence is no longer available in game, but I plan on keeping this trinket forever.

Once upon a time, druids had to complete a long (awesome) quest chain in order to get their final flight form. This key used to be part of the chain where you had to go summon Anzu, the Raven Lord and defeat him to move on with the chain.

Afterwards, you got to keep the Moonstone and go back to Sethekk Halls whenever you wanted to farm the mount Aznu drops.

I had a group of people who I used to bring my key for so that we could farm the mount. Now that you no longer need a druid there's no reason to keep this key, but there's no way I can get rid of it.

My very favourite weapon. I farmed Cenarion Expedition rep so hard to be able to have one of the best tanking maces ever. I collected spears, unidentified plant parts and ran Underbog so much I'm sure I went crazy.

It was sold by Fedryen Swiftspear for 265g, which at the time for me was not a trivial amount.

I tanked with this mace for a long time, I never did get a Wildfury Greatstaff... I loved that bear druids got a mace called Earthwarden - it's a very fitting title!

I'm saving this mace in the hopes that one day, druids will have a viable tanking mace to use so that I can transmog to Earthwarden.
Posted by Kaleri at 3:51 PM

Looking for something specific?